Wednesday Social
Every Wednesday from 10 a.m. to noon, the public is welcomed to the "Old-Timers Social" held at the museum. Chat with those who grew up in Martin County. Refreshments served. Free admission. 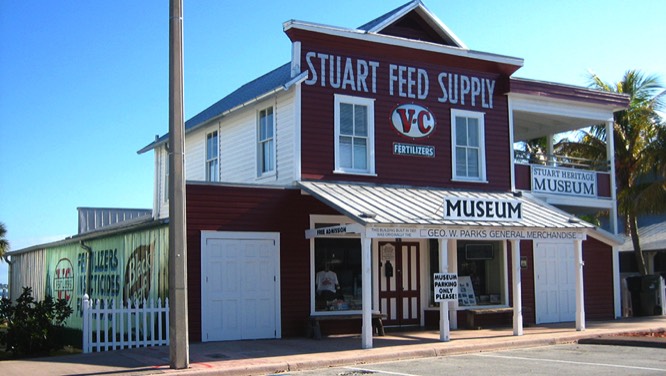 Gathering Artifacts
During those early years, donations of artifacts were gathered and organized in the remainder of the building. Some of the earliest Stuart memorabilia came from the efforts of Capt. Francis Adams, who had established a Stuart mini-museum in a small building behind the Stuart Police Station on 7th Street from June 1972 until his death in September 1975. With these and other donations from families who had lived in the area for decades, Stuart Heritage's inventory and variety of items steadily increased. Approximately 80 percent of the artifacts were acquired locally.

Preserving History
Local architect Don Armstrong was a founding member and Stuart Heritage's first president. He and other members set the organization's goal to protect Stuart's historical identity. Besides its numerous artifacts on display at the museum, that preservation has included saving numerous early buildings and homes which might otherwise have been torn down.

Historic Preservationists of the Year
Since 2011 there have been seven individuals in Martin County who have received awards in recognition for their work on preserving the historical buildings and history of this area.
2011: Sandra H. Thurlow • 2012: Joe Crankshaw • 2013: Alice and Greg Luckhardt
2015: Iris Wall & Jonnie Wall Flewelling • 2016: Harold Markey

Come Visit Us!
The Stuart Heritage Museum is open seven days a week from 10 a.m. to 3 p.m., with always free admission to the public. Volunteers staff the museum to answer questions and explain exhibits and artifacts. Come visit us and discover the rich history of Stuart!